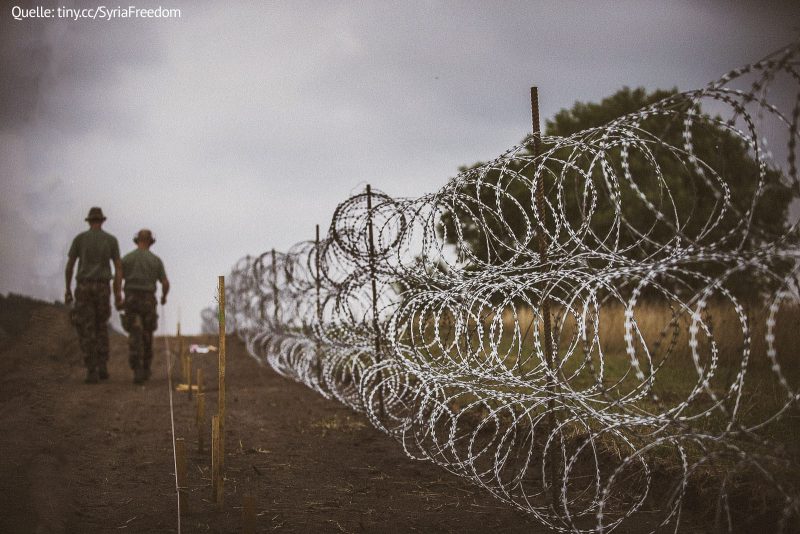 More and more people are fleeing the civil war in Syria and from the breakdown of the Iraqi state. The refugee camps in Turkey and the states surrounding Syria have been overrun way past their capacities for years but recently pressure on the European states has increased as refugees make their way into the imperialist heartlands.

The first signs could be seen in Lampedusa or Calais – in the last month though the number of refugees has significantly surpassed the capacities of the camps and registration infrastructure provided by the bourgeois states of Europe. The barbed wire fences in Hungary and the other border states will not stop people who have come so far to escape Assad’s barrel bombs and the terror of ISIS. Right now there are police and military stationed at the borders shooting teargas and rubber bullets at refugees trying to enter. The Hungarian military has even received permission to use firearms in a non-lethal way. That is what capitalist human rights look like when it comes down to it. The imperialist core of the EU is trying to make it seem like this is just Hungary’s right wing, nationalist government going buck wild. But looking at the billions of Euros that have been invested into the Hungarian border this is hard to believe. It is just the scenario easiest to sell to the public while screening heartening pictures of individual activists who are trying to compensate for the shortcomings of the European governments, a task that can not be accomplished by them. At the same time the EU is preparing more coordinated military actions in the Mediterranean Sea to simply sink the boats trying to cross over to Europe. 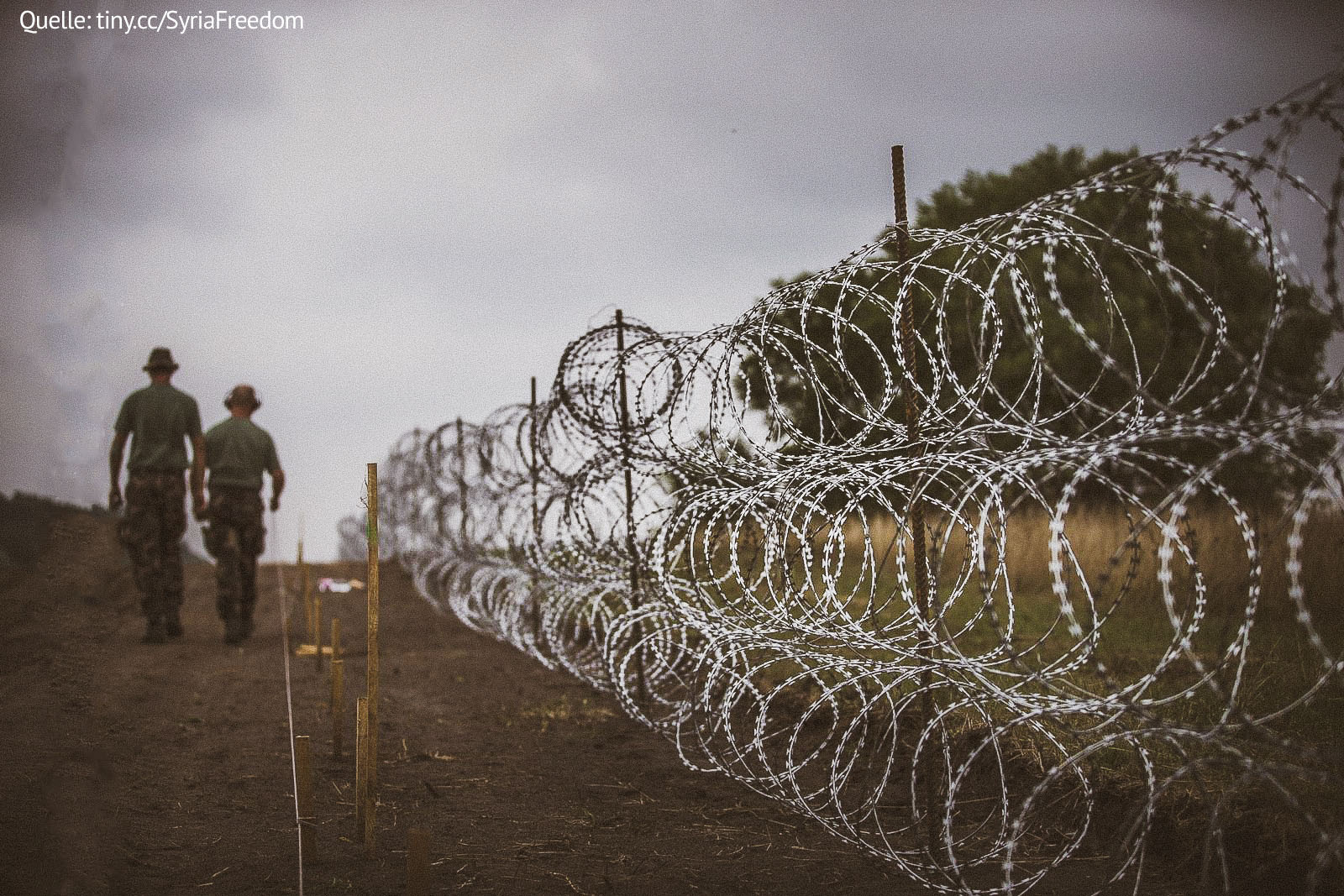 As a result of EU policy the hungarian government is now able to using the current “refugee crisis” in order to push through a variety of anti democratic and racist laws which will not only enable the hungarian police to search all places where they suspect illegal immigrants without any sort of search warrant. They have also now pushed through a law, making it a criminal offence to enter hungary illegally and set up a system of speed trials in order to deport and criminalize refugees. As an enormous number of refugees are young people and children they are also legally treating 14 to 18 year olds as adults to get rid of them. The ruling party in Hungary, FIDESZ under Viktor Orban, has been pushing through antidemocratic measures and austerity policies in the last couple of years and has recently lost its absolute majority in parliament[1]. Since the fascist party Jobbik are now the second strongest parliamentary force in the opinion polls, almost catching up with Fidesz[2], this might lead to a future coalition of Fidesz and Jobbik furthering the right wing backlash.

The rest of the european countries is currently trying to make it look like they have nothing to do with the actions of the military or FRONTEX at the EU borders. The German and Austrian governments are praising their great “welcoming culture”, while closing the borders. Especially the weapon industries in Germany and France have profited from both the wars in Syria, Ukraine and Africa and the investments into border security.

The ruling classes of Europe have also found another way to exploit the precarious situation refugees are faced with when fleeing to countries like Germany. It is no coincidence that capitalists are all of a sudden calling for a work permission for refugees, the welcoming culture is limited to the principle that refugees are welcome as long as capitalists are welcome to exploit them. They hope to create a completely vulnerable, powerless strata of the working class which they can exploit as much as possible. We fully support the right of refugees to work and lead an emancipated life in the countries they had to flee to, but we need to force the unions into organizing a campaign in support of refugee rights as well as organizing refugees as fellow union members and workers.

As for the war in Syria it has also developed more characteristics of an imperialist conflict.The US are bombing oil refineries and sometimes even ISIS, the CIA tries to put forth a force acting in their interest, Russia is exporting aircraft, battle tanks and even personnel to Assad and regional powers such as Qatar and Saudi-Arabia are investing in the war as well. The rigorous continuation of this brutal conflict has lead to a wave of of refugees not matched in decades.

To meet the needs of these people, which is our duty since our wealth is founded on their misery, we need to coordinate internationally. We need to force the European governments into opening the borders, providing safe passage for every refugee and organizing sea rescue initiatives. We need to force them into providing appropriate housing, food and healthcare for everybody. We oppose the idea of creating „nicer“ forms of detention camps but we argue for the right of refugees to live in socially funded housing, not segregated and hidden away from society but as an equal part of it. We need to fight against racism, the growing right wing in Europe and the ongoing attempts to divide us. Therefore, we also oppose every concept of discrimination between economic and political refugees – freedom of movement is everyone’s right, no matter if they are fleeing war, hunger or poverty. We need to demand full citizenship for everyone, the right to vote, to work, to live wherever they want and the right to organize.

Right now we see the individual effort of thousands of volunteers and their great sacrifices all over Europe, which is admirable and a natural reaction to the suffering of others. But it is not a possible solution. We need to address the issues that are really responsible for this situation; the Assad regime which has slaughtered tens of thousands and displaced countless more, the imperialist governments and economies that are profiting from war, exploitation and poverty and finally ISIS who are a creation of imperialist interventions. We need to demand that they stand up to their crimes and pay for them. The struggle for the refugees is not fought or won in the camps, at the registration sites or borders. It must be brought to the streets, into the imperialist centers if we want to solve it. The war that has been brought upon the Syrian or Iraqi people needs to return to those who caused it, the bourgeois class.

Though the demands we are raising against the governments of Europe are based on the dire necessities of being a human, it would be foolish to expect the bourgeois states to try to fulfill them as they attack the very base of their power and wealth. The recent development, the crisis, shows with even more vigor that we have all the right to do so. This tragedy cannot be ended until we eradicate the real cause for it, the capitalist system. A social structure based on ever growing exploitation of the majority of people has not the potential to solve this crisis for it is the cause of it. If we want to help the refugees, if we want to fight the rising racist and nationalist movements we need fight capitalism as a whole and bring it down.